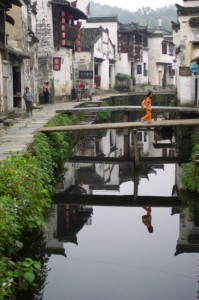 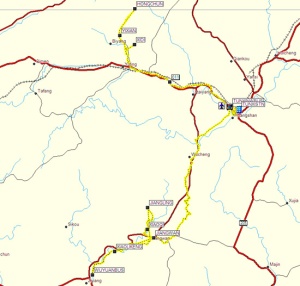 This is another one of those quick decisions. Before I know it, I’m already on the 2235hrs N418 train to Huangshan. This is an overnight train that will take 12 hours to get to Huangshan City, also known as Tunxi. I’m no stranger to Chinese hard sleeper trains.

As usual, picked up the middle bunk. Hard sleepers have compartments with 6 beds, 2 columns of 3 bunks. The cushion is at least 5cm thick, enough for me. The trick is to get the middle bunk, for me at least. Top bunk smells of smoke (someone is always smoking in the non smoking train) and there is always someone sitting on your bunk at the bottom. Ticket cost 169RMB one way and it is now possible to buy return tickets in Shanghai.

Packing was quite difficult. On one hand I wanted to pack light as I could be village hopping a bit, but I’d want to also pack quite a number of photo gears. At the end, decided not to pack long pants, purely shorts, 3 t-shirts, socks and underwear, of course, and premium disposable toileteries from my many trips to Tokyo. The D2H comes along with spare EN-EL4a battery, 40mm ULTRON, and 105mm AIS lens. Thought about my new 12-24mm lens but had to cut down on weight. theres also the Leica M6 with 8 rolls of film and a 50mm Summicron lens. And the trustworthy Ricoh GRD.

Anyway, train is zipping along now and it should be time to sleep. And then I had another eureka moment with this system. When you board the train, a conductor comes along and switched your train ticket for a credit card thingy. I then realised that is how they keep track of who is going where. Between every stops they will come to wake you up and exchange your card thingy widget back to your ticket. That way they know who has a ticket, where they are going and will be able to catch fare dodgers! Genius!

1004hrs Tunxi Train Station: As far as this station goes, it is a typical chinese train station, complete with the touts peddling tickets for buses to Huangshan, and they don’t stop. They are like canaries, one old woman even said it was going to rain up on the mountain, of course she was selling cheap plastic ponchos and doesn’t help when I told her I was not going to Huangshan anyways.

1033hrs Tunxi new bus station N29.73255, E118.28796: Ok, google maps showed a bus station near the train station past a Youth Hostel, but this is the old station. It is not functioning anymore. Took a taxi about 10 mins to the new station, and according to my gps, it looks like its on the way to the Huangshan airport. Taking a bus to Wuyuan town as my base. According to the time table, there are 3 buses from here, 0810, 0900 and 1230 is the last bus. My ticket cost 34 RMB one way. Guess I might have to buy the return ticket at Wuyuan as soon as I get there. This station has a largish hall, with overclipped Kenny G playing in the background. I have an hour to burn. Wonder what to do…

1056hrs Tunxi Old Street: With almost 2 hours to kill, I took a taxi to the old street, which the first taxi driver boasted as being the best around the region. Locals here have a habit of parking their cycles on the middle of the old street, and it is probably a non issue since no cars go on it anyway. All the shops sell souvenirs, but there are not too many tourists here on a Thursday morning. The shop houses are definitely old looking, with laundry hanging everywhere. The old road could probably squeeze 2 lanes of small cars, but not much more for anything else. 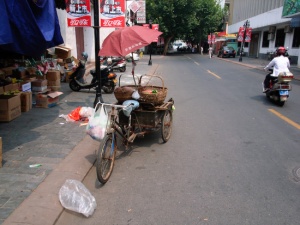 1202hrs Tunxi Bus Station: Back here again. Had a simple lunch of salty kungpao chicken with a little vegetables and plain rice. Not in the mood for a feast. The 2 bananas on the train was quite filling. Waiting at gate 13 for the bus to Wuyuan. The ticket has the time of the bus, the license plate number and of course the seat number as well. Its all in chinese, but shouldnt be too difficult to make out what it means.

The bus is nothing to shout about, it moves and it looks like it has not been taken care of for some time. The road starts off boring typical chinese suburb, then it starts to wind between hills and little villages with farms on the tight valley floor, best view is on the left of the bus. I sat beside a chinese guy that lives in Tunxi and visiting Wuyuan for the first time. Recommended a couple of places around Huangshan including the mountain but smart me didnt take note of it all. So, valleys, with tight roads, ocassionally having to give way to a large lorry as it was too narrow, then some plains, and finally Wuyuan. This town is so small it is almost impossible to know you’re already there. As usual, the bus drops you off not at the bus station but somewhere outskirts.

Once I get off the bus, there are already all these motorcycle for hire, plus driver of course. I jumped on one after checking the price. Costs 12RMB from Wuyuan town to Xiao Likeng, where I intend to stay the night. I hate riding behind on a motorcycle, they’re always too small for me, and after 5 mins it starts to feel uncomfortable. So here I am, backpack behind me, camera pack on one side, left hand holds a Garmin GPS to see where this pace is in spatial sense, and right hand holding mr Ricoh GR Digital. We seem to be back-tracking the direction I came from and a small turning and I start to realise how touristy this place is! Its the bus parking lot that gives it all away. 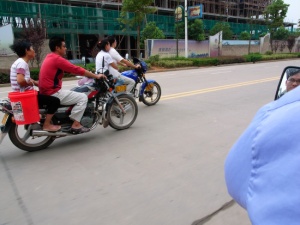 1507hrs Xiao Likeng Village: There is an entrance to this village and a 110RMB entrance charge. Although the motorcycle cost 12RMB I told him to keep the 15RMB change, spoiling the market in the process. An entrance fee tells you something in China, its usually spoilt paradise when you have to pay to get in. But this place is not one of those. If you remove the loud tourists, and the western backpackers, even the signs in english, chinese, japanese and korean, Xiao Likeng is actually quite likeable. I was originally expecting a nice wide angle shot of the whole village but that was not to be. All pictures are close shots where the 35mm is king. Too bad I brought the 50mm out to play so. This town seems to be populated by old people, so great for those after posed pictures of smiling wringkly old people, because they were not smiling all the time for sure.

It is possible to walk around the whole town in 1 hr. My walk took 2 as I did a couple of detours to the back gardens where they grow rice. There are 2 rivers that flow through the town and thats where the locals clean their dinner (and possibly mine too) and do their laundry. Water is reasonably clear, and flows quite well. There are artificial dams that gives the waterfall feeling throughout the whole town. I put up at the Guang Ming teahouse, a small room with aircon and shower with no towels for 60RMB per night. Not bad value. They serve dinner too at the tea house.

2135hrs: Getting quiet in this town. Time to get some sleep. Took the phone number of the motorcycle driver i took this afternoon, told him to pick me up at 730hrs tomorrow morning for a multi village romp. Need sleep now… 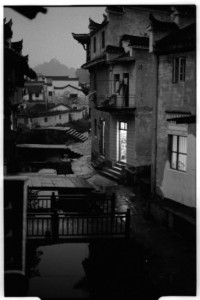 Ordered too much for dinner tonight, a vegetable dish and a pork dish with too much fat in it. Didn’t finish the whole thing of course. The little pot of tea made me think that the whole meal was healthy. But at the end of the day, the taste is not too bad and it actually above average. Then again it could be because I was hungry!