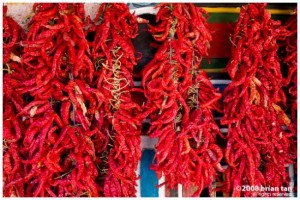 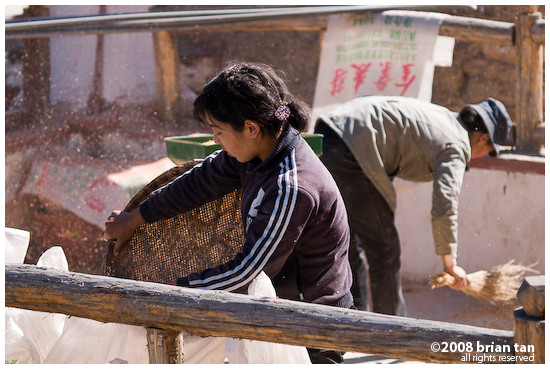 Based on time killer recommendations from Joy from Sim’s Cozy over at Chengdu, I will make a one day stop over at Danba as the only way to get back to Chengdu from Rilong is to go through Xiaojing and Danba. It helps too that there are 2 daily buses (0630 and 0700) from Danba.

Danba seems to be famous for two things. Everyone says the girls there are beautiful. Even best in china, but I have heard of that before in Suzhou. And as expected its because of the climate that gives them a nice complexion. And everyone here also says that the good looking ones are in Chengdu. Danba is also popular for the couple of tibetan villages around the town. Danba lies at the confluence of rivers, and in a deep valley. Some of the scenic villages are perched high on top of steep mountains. 14 November 2008, Rilong to Danba: It was a 0700 pickup by the same Mr Zhang that brought me to Rilong from Xiaojing. We arranged a trip to Danba for 300 RMB, about 150 km away and a day trip to 3 villages around Danba for an extra 100 RMB. Plus the 150 RMB I owed him from last sunday. While I know the driver normally runs a mien bao car (private hire vans that pick up anyone anywhere between set destinations), I allowed him to pick up 2 ladies to drop near Xiaojing. With the 17 RMB we made, he brought me to the best beef noodle place in Xiaojing. From what I can see, salt, soya sauce, plenty of hand pulled noodles, mountain cow beef, bamboo shoots, coriander and plenty of chilli and you have a serious bowl of best noodles I have tasted in china so far. I have seen many mountain cows in Siguniang and its the first time I have tasted it. 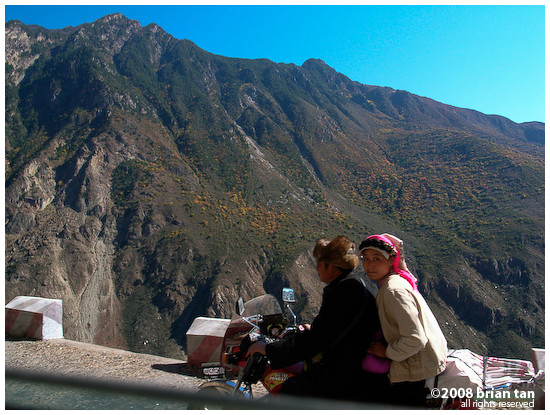 After a heavy bowl of beef noodles in Xiaojing it’s time to continue to Danba. I will visit the villages first before buying bus ticket and finding a place to stay in Danba. 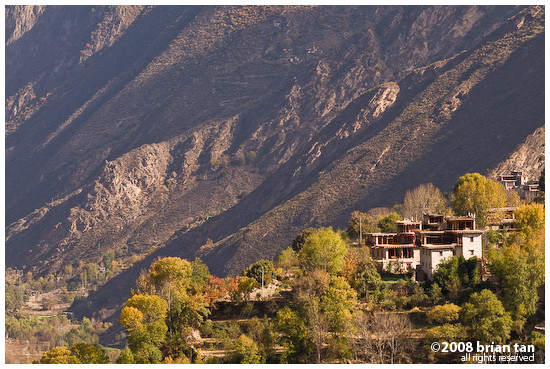 On the way learnt some interesting facts from the driver. First, he confirmed that people get rocks to build houses by creating landslides by roadside. As by the road always means a mountain next to you, the landslides cover half the road breadth. Also learnt that the Dong An brand of chinese mini van is crap and costs only 30k RMB each. His is better and more reliable at 50k RMB. Business is also bad this year for all in the tourism business because of the earthquake. They all hope that it would be better next year when the road reopens. A full section is closed, or better illustration would be the word ‘destroyed’. He also recalled being in his van on May 12, and could see the mountains move and landslides everywhere. Its apparently the first time he has seen one and the previous one was before his time, about the time the red army marched through the valley. Google it up, I don’t have wikipedia when I wrote this so I don’t know when that was, but I’m guessing 50s or 60s.

Zhonglu Village (N30.89823, E101.93823): First stop, the village closest to Xiaojing. Ok, so the villages also charges entrance fee for non locals. Not sure what non locals mean. My driver is from the next Aba prefecture but its free for him. Surely I look foreigner so that’s an easy catch. 20 RMB gets you through a dirty old man and he will raise the barrier for you. After that its a full 15 minutes uphill. GPS tells me its below 2000m at entrance and you go up at least 400m in altitude before getting to the village. Zhonglu is perched on top of a mountain, on the way up it is all steep slope but at the top there are just gentle slopes, enough to cultivate plants. I got out of the car next to a primary school and walked a while. Not sure what to see in the village other than the scenery especially the next village just across the valley. There are a couple of those ancient watch towers here. Snap snap a couple of photos and its time to move on. There are animals everywhere so watch out for droppings. Pig droppings you can smell, not cows.

Jiuju Village (N30.92061, E101.86818): Next up a ride through Danba across the river twice and its time to go up hill again. If I can explain the scene, valley floor fast flowing rapids, surrounded by 500m high steep mountain cliffs with sparse vegetation and white buildings with pointy corners on its roof top and a few watch towers. 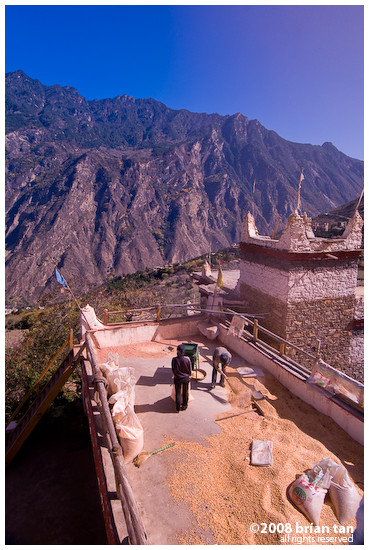 Jiuju village takes longer to drive up. Possible to get a taxi to bring you up but there doesn’t seem to be taxies up there to bring you back down. This village is famous for its stone tibetan houses, which seems a little more uniform than Zhonglu earlier. Entrance gate is on top just before entrance to the village. Ticket costs 300 RMB and for that you get a ticket with a stamp and postcard all in one. Again, vice vistas but up close the houses are houses, all sorts of things hanging around. Plastics and satellite dishes don’t really spell ancient for me.

We made it to a model home (actually it looks like a 20 room hotel) and as thwarted owner and her daughter was crushing corns, we joined them on the rooftop. One thing I noticed here, the houses in this area are all flat and there are always staircases up there. Most houses dry corn cobs up on the roof, and this one seems to remove the skin from the corn but it still remains in the bean shape. My driver tells me that the corns are used to feed pigs. Not easy to see the pigs as they are kept in the house. Follow the smell. There are also chilies being dried. We know that is for humans.

After, its time for one last village.

Suopo Village (N30.85032, E101.92859): Village could be seen last sunday as I was coming to Xiaojing. Since I’m not in the mood to pay for more entrance fee, and the villages look better from far, I told the driver to drop me off on the highway for a wide angle shoot. When we got there, there were construction on top of the mountain above where we were about to park the car, and having been scared after the 2008 earthquake, my driver told me he will park 100m away in case rocks fall.

Suopo is also perched on top of a mountain, but the slope is gentler, and rises at least 400m to the top. There are many old towers here, all the way from the bottom to the top of the mountain. They look at least 5 storeys tall and look like factory chimneys. Driver says they’re not used anymore. Amazing sight. 12mpixels on my dslr caught them all with enough details. Danba Town: Time to drive into Danba. He dropped me off at the bridge and I caught a taxi down to the other end of the town to the bus station. Normal fare is 10 RMB but I only had 5 loose change and he took it anyway. No sour face neither. Nice chatty fella. 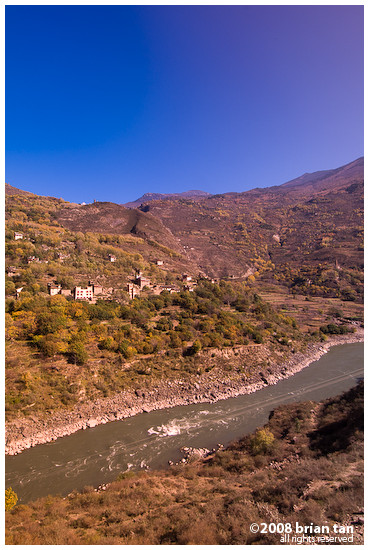 Bus ticket cost me 117 RMB from Danba to Chengdu at 0630 hrs tomorrow. The bus station also houses a hotel, and I took a room for 80 RMB. They asked if i wanted single room or standard room, I asked what the difference is, and he said its the same, so I said give me standard then. This is a typical chinese government hotel. Reception has a burning coal pot as there are no central heating. Toilet is a squatting type. Comes with towels. Floors are never swept. And you are kept warm with electric blankets. Sounds of tractors permeates from outside narrow streets, and occasionally chinese Jingbei motorcycles go past playing tacky chinese techno. Naturally riding with helmets are frowned upon here.

After 1 hr snooze after wondering why my leica M6 wouldn’t meter today (dead CR1/3 battery), I went out for a walk around town.

For dinner, walked into a small 5 table restaurant and naturally went for the yak dish with extra mini celery and a bowl of soup with eggs, tomatoes and vegetables. Very nice dish and cost me 32 RMB. I am now a convert to yak.

The trip back was in a rickety bus, probably not too old but daily 12hrs trip made it rattle a lot. Joining me are 23 other smoking and chicken feet eating locals including 2 ladies in traditional costumes.

It has been a long week, battling issues associated with high altitude. Resting back at the hotel after dinner watching chinese TV. Tomorrow morning I will return to Chengdu and to the north thereafter.

This western trip has been interesting. A whole region with towns and villages built either in deep valleys or high in the mountains. The steepness of which made it easier for me to understand why the earthquake this year was so devastating. It takes almost nothing to cause huge landslides here, and there are mountains everywhere.

Signing off for part 3. Next: part 4 Jiuzhaigou National Park