Somehow the end of the year season is now becoming a global holiday. In places where Christmas is not normally celebrated, you have lighting and large trees, especially in areas of commercial interests and where shoppers like to feel like they have an excuse to shop more than they usually do. I don’t celebrate Christmas other than accepting gifts. Somehow I don’t think I will get anything from anyone this year. Self-pity aside, one thing I do during the end of the year season, is NOT be in my country of residence, always preferring to be out travelling during this holiday. Last year it was the toture up Huashan in Xian province, China. And this year in 2008, thanks to free ticket courtesy of the airmiles I have collected on Cathay Pacific, this year the destination is Japan.

With the Japan Rail Pass, trains are now affordable, especially when the trip involves long distance train rides on the excellent Japanese bullet trains and jumping from train to train everyday. Anyone who has been to Japan knows that travel by rail, for any kind of long distance travel there can get quite expensive. The Japan Rail Pass brings flat rate rail fares for multiples of 7 days up to 21 days. For long distances like Tokyo-Hiroshima, a Rail Pass for a week cost less than a return ticket for the same destination. For my case, a return ticket to Hiroshima from Tokyo Station is roughly 18,000Y one way reserved seat while a Rail Pass is 28,000Y for 7 days. Only difference is that with the Rail Pass you cannot use the Nozomi express trains. But not a big issue. So I proceeded to purchase the pass in Shanghai, and generally any of the Japanese airlines like ANA or JAL will sell them. You buy a document the size of an airline ticket way back when they still use paper tickets, and exchange it for the Rail Pass when you arrive in Tokyo. As far as I know, it is not possible to buy the thing when you arrive in Japan. So plan ahead.

20 Dec 2008 (Tokyo, Kawaguchiko): The 1 hour time difference between Shanghai and Tokyo makes the 2 and plus hour flight feel longer than it really is. This is nothing special, I have been doing Narita to Tokyo countless times in 2008 for work it just feels second nature. Since there is no more hotel to go to as before, I take the Narita Express NEX and first stop would be Nakano to have a browse at Fujiya Camera! Right after a quick stop by Map Camera at Shinjuku West Entrance before going to the Keio bus terminal for the 1900hrs bus to Kawaguchiko. 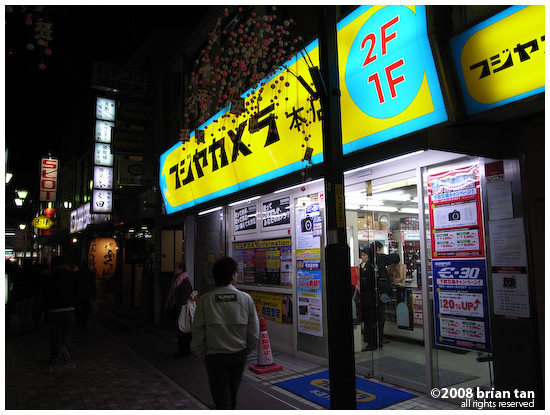 Kawaguchiko or Kawaguchi Lake is a small resort town at the biggest of the 5 lakes that make up Fuji 5 Lakes on the northern side of Mount Fuji. The lake bank makes for very good scenic shots of Mount Fuji, weather permitting. A quick check with the Japanese Weather Bureau tells me that the rain was going to hit Kawaguchiko area the two days I planned to be there. No good, but chance of rain is 70% so there is still a small chance of nice weather part of the day. 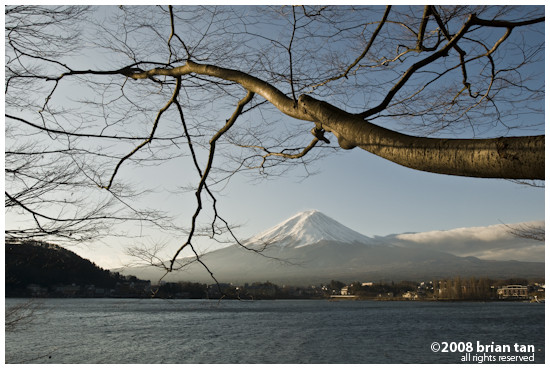 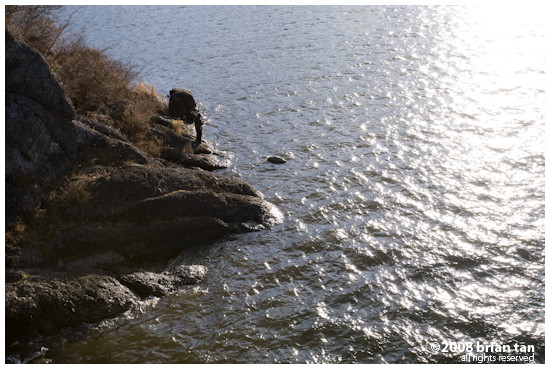 The Keio highway bus costs 1700Y and makes about 14 stops before hitting Kawaguchiko and continuing on to wherever. I arrived late at night and took a nice 30 minutes stroll to K’s house hostel, located close to the lake and as I highlighted in my last visit there, is possibly the cleanest hostel I have ever seen. Got a more expensive tatami japanese room this time and it was very very comfortable.

Too bad by the time I arrived at the hostel, started to feel like crap, combination of lack of sleep during the last week and the beef stew I had during the flight. Later it would turn out that I had food poisoning but a day of careful eating and plenty of water would cure it eventually.

21 Dec 2008 (Kawaguchiko): Woke up feeling slightly better, but it was evident that what I had yesterday (and partly today) was food poisoning. Looking at the timelines, it is most likely the airline food, but I cannot be sure and maybe it is better not to put the blame on anyone. However, food poisoning or not, I still got and by 0600hrs I was on my way across the bridge to the other side of Kawaguchiko to shoot Mount Fuji in the morning. This was the same spot I was at earlier this year when I shot with 6×4.5 camera. The sun seems to be rising in a slightly different spot compared to what I recalled from the first trip. But as with any landscape photography, early in the morning is the best time as for a while the light on Mt Fuji is not too stong, at least not enough to cause the snow on the moutain to be overexposed compared to the foreground. Thanks to my new Singh-Ray graduated neutral density filters, I was also able to control the relative exposures of the moutain compared to the lake. 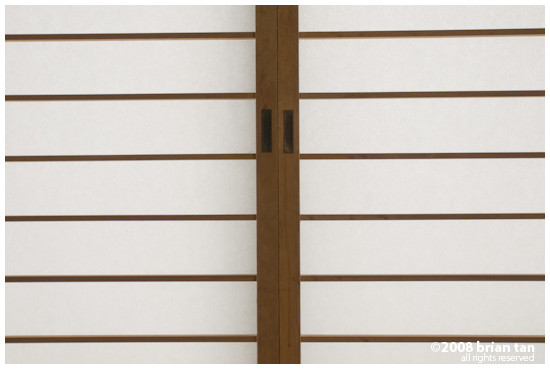 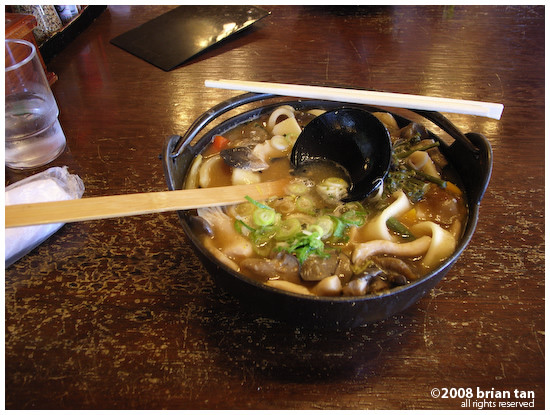 After the photoshoot, it was time to get back to the hostel for a morning nap. It was barely 0800hrs when we were done shooting. For lunch it was time to look for some Hotto, the local speciality. It is mostly a thick udon like noodle in a miso soup base and vegetables. I guess I have never had so much pumpkin in a soup, and I confess I was a little overdosed on it for a while. But Hotto in winter, with the hot miso soup with vegetables in it, was just the right combination. And this is not just any cheap miso soup that you get in Japanese restaurants outside of Japan, but proper artisanale (I hope! for the price we pay for one of these dish) stuff that taste a little richer. 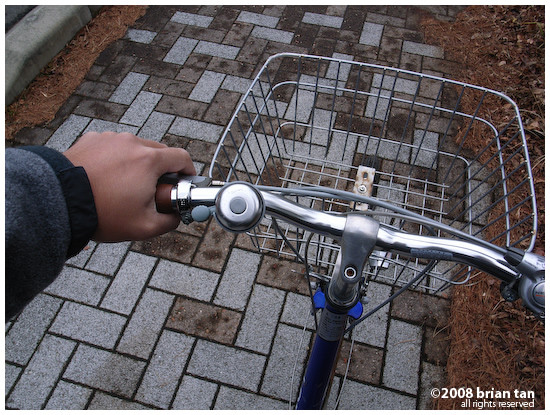 22 Dec 2008 (Kawaguchiko, Tokyo): The original plan was to wake up earlier and have another photoshoot of Mount Fuji again this morning, but the panda in me reigned today. work up well after the designated 0500hrs alarm that was set last night. As the sunlight bright and overhead already by then, it was not really a good time to do some serious landscape photography. By now I was feeling much much better compared to the last 2 days. Checked out of the hostel and left the heavier backpack in the storage room. Since I seem to be back in Kawaguchiko all the time, decided to make a survey of the lake area. So took a rented bicycle across the bridge again and proceeded to make a circumnavigation of the lake anti-clockwise, just to see what was around the place and to scout for new photo locations in the future. 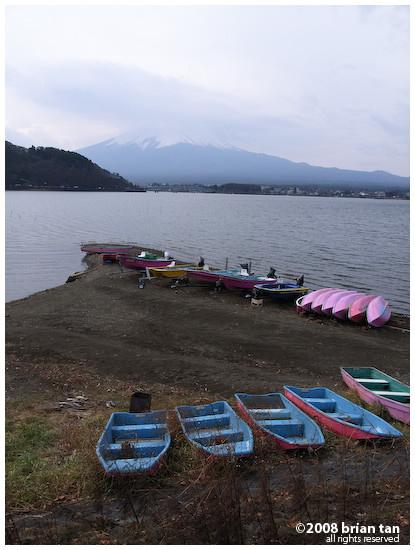 There are many hotels around the place, and looks like this is quite a getaway for people from Tokyo. At this time it seems to be off-season, as most hotels have empty car parks. The interesting thing for me about Kawaguchiko is that at every portion of the lake, Mount Fuji, being quite the dominating item in the landscape, appears to be different, depending on what is framing it. There are cherry trees all over, so in spring it shoud be quite interesting indeed. And in Autumn, red leaves framing the mountain should be quite a draw. I entered coordinates of future photo locations into my Garmin GPS and hope to come back again next time. 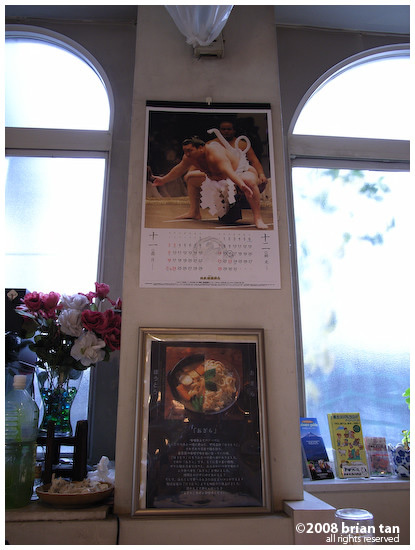 And after lunch it was time to return to Tokyo by bus and to rest before the second leg of my trip begins.