I have been having free weekends in Seoul lately and this weekend I was quite determined to go somewhere outdoors after a few disappointing sights around Insadong. Saturday was not that great, it rained. Pretty heavily too. Sunday started off good, not a sunny day, but with low clouds and chance of rain. I did a quick check of the weather, clouds are moving relatively fast, but the texture seems consistent and there doens’t seem to be too much risk of heavy rain, so umbrellas were not required. So picked up my small utility bag with a D300 SLR and a Nikkor 12-24mm lens and a GPS and I was out without a clue of the route to take, but as long as I’m going uphill I’m on the right path.

Target today is Inwangsan, a mountain just to the northern border of Seoul. Close enough to be able to reach it by Metro line 3, Dongnimmun Station. Not the mountain top, of course. The station straddles below a main road that leads out of the city to the north. This destination took up only a small portion of Lonely Planet guide book which I did not bother to bring along with me. So I started looking around for a way to get up the mountain. (By the way, realised after this climb that the proper and easy way up is on the east of the mountain, so you will need to walk anticlockwise around it from the Metro station. I went clockwise.)

Going up north, I came across a bunch of apartments and a pedestrian foot bridge after going slightly uphill, still along the main road with mountains on both sides. Figuring that as long as I go uphill, I’d get to a trail, I decided to go up a very steep concrete road, which leads to a small village on the foot of Inwangsan. Its a tough slog up this slope that runs about 200m. There were a few old hikers loitering around so I followed one. Look for the playground behind the village, where you will find the start of the trail identified by a map board which is unfortunately in Korean. It looks like the old city wall goes up this mountain along the spine so this should be fun. 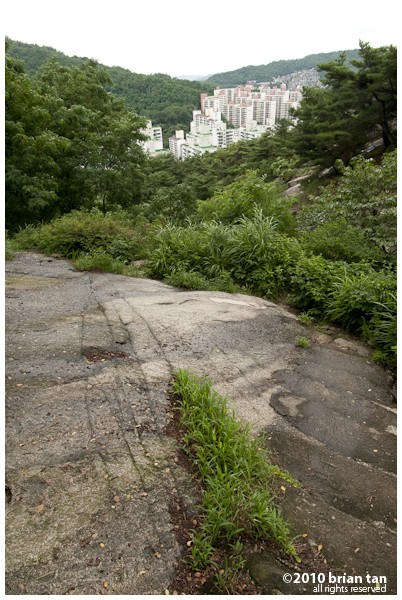 Initial stages of the walk was pleasant enough, trail under heavy forest cover, with clear trails. It then starts to look as though the climb up will be wet and steep when a water fall appears and the path seems to be along the waterfall, sometimes part of the waterfall itself. Waterproof shoes will be useful, but I was wearing my Asics running shoes and with proper steps, it will not get wet. But slippery it definitely is, as water over granite for a long time breeds algae. I don’t think the path I took was the easiest one, as frequent breaks are required. Some parts of the trail can be confusing as there are no signs and it seems to branch off in another direction. Good that I have my GPS with me, so I was able to move in the right general direction.

I took changes at the first t junction encountered and took left turn, and came upon my first view point: a bald patch of rock stickout of the mountain with conifer pine trees all around. This place should be good in winter. The view are up in the northern direction mainly of apartments, bland as it is.

The last few hundred meters are where it gets interesting. There are two patches of the trail which is just rock surface with a rope and you’re suppose to haul your own ass up that thing. What happens when you slip? Just tens of meters down I suppose, which makes me want to say, don’t slip then. In Hong Kong this would be a category 6 out of 5. I am just whining because while I was navigating a section of rock with centuries of pilgrims cutting out foot holds, carefully finding the best place to have at least 3 contact point like what I learnt from a Bear Grylls documentary, an old Korean woman with those oversized visor overtook me while climbing a rock! Ok, no more complain and keep on moving.

While this trail is more like mountain climbing rather than a easy slope to navigate, eventually I get to the top of the mountain, easily identified when you first start to get close to an old wall. The peak is a large area where hikers are resting after the long walk up. I’d say it was worth every bit of effort that was put into it. The peak is a rocky outcrop around 350m high in altitude. Somehow they managed them to squeeze in a helipad up here. The view is 360 degrees but not continuous of course. To the south is downtown Seoul with Namsan mountain and its telltale transmission tower sticking out like a sore thumb. Loud Korean hikers are all over. Dressed in their neon hiking gears. One of the local peculiarities. To the east, a structure that looked like an imperial palace is visible, framed by mountains with a visible wall running along its spine. This forms the old city wall, lower than the massive walls in ancient Chinese cities but probably not less effort to construct as the terrain is inhospitable.

I hung around the peak for some time, trying to rest but the pesky group of retiree hikers in neon gears were starting to get irritating. I tried to type this blog post out on my new HTC Legend, but the AMOLED screen is unusable when I look at it through my transitions eye glass lens. Without, its barely legible. So I gave up, preferring to type when I get back tonight. It is around 3pm when I got to the peak, the light too harsh to have any nice photo taken, but next trip up I will need a tripod and do some panoramic shots. 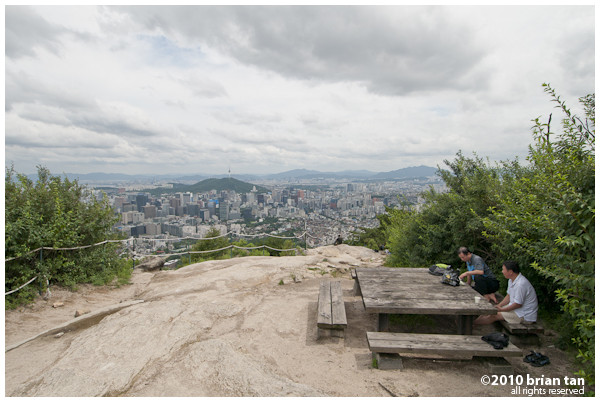 It looks like it is possible to continue the trek down the mountain on the other side away from Seoul city, but I decided to go down where I should have climbed instead of the hard route I took. The route is still quite steep going down, but the main difference here is there are plenty of raillings to grip and the steps are much more pronounced. Some areas are single file only so there are quite a lot of waiting. The path goes past a fort on the mid point of the mountain, but the area is cordoned off for construction. New slabs of granite are used to form the fortifications, and I’m guessing this is a renovation for tourism reasons and nor for real security because in this day and age, any granite wall 1.2m high is pretty useless against any enemy. 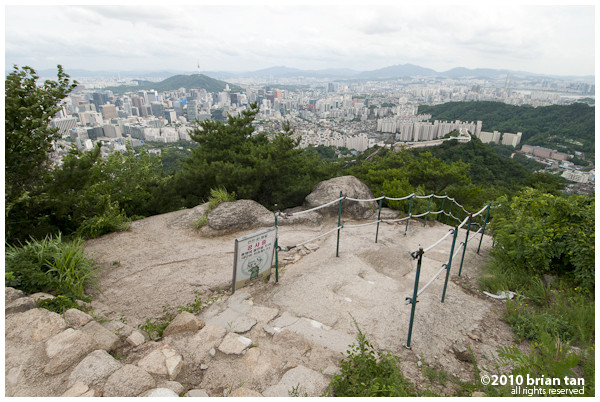 The way down is pretty boring. But there are a few spring and after seeing people refilling their mineral bottles with water from the tap, which I guess comes from the spring, I did the same too. Tastes really good actually. The way down can be confusing as well, but I made it back to a different Metro but with a GPS plot in case I need to get up this mountain in the future. I think I will need to do much more research than this trip so that I dont waste too much time wandering around looking for something. The problem with countries like South Korea is that on Google Maps, after a certain level of zoom, when the street names are visible, everything becomes Korean, which is pretty much useless for people who don’t read it. Anyway, got down in one piece, had a look at a stunning 360 degree view of Seoul, and time to look for Kimchi stew for dinner!