One of the daunting peaks at Bukhansan National Park

Forest Canopy from the peak

The answer to question of what a typical normal Korean would be doing on their weekend would be to climb a mountain. So in my assimilation training, I picked up a friend and we’re off to Gupabal Station on Metro Line 3 on an excellent warm summer Saturday morning. We’re in shorts and t-shirt while the fellow hikers at the Metro station are all in Gore-tex and week long packs with titanium cups hanging off it. Reminds me of the old hikers in Japan, overdressed for the occasion. All I had was a bag with my camera and GPS in it, expecting an easy walk all the way to the top. 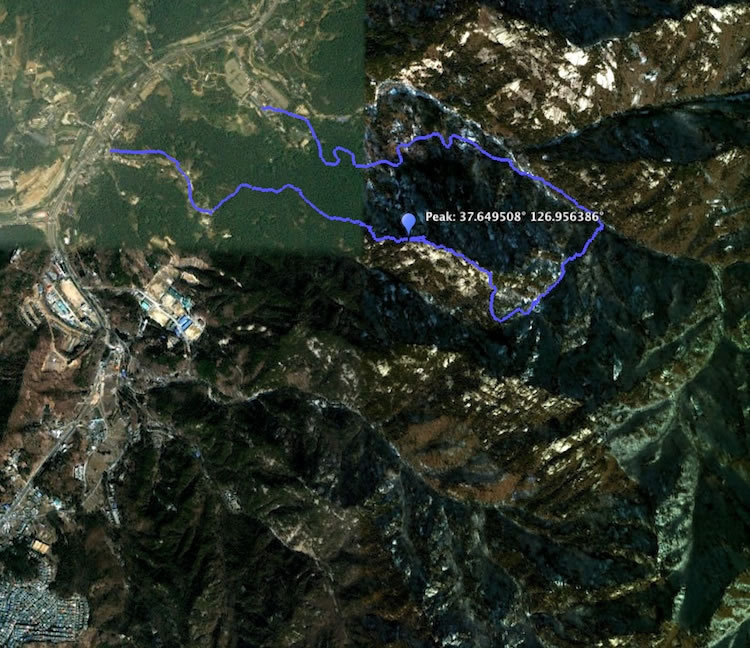 Blue line shows the GPS plots from this trip. The peak is marked with the GPS coordinates, reason being I have no idea what the peak is called as of writing.

Target this weekend is one of the peak at Bukhansan National Park, a bunch of peaks to the North of Seoul City Centre. Its technically inside the city, surrounded by urban sprawl. Some of the peaks in the National Park are quite scary indeed, craggy peaks with no visible easy route other than with crampons and drilling holes in the rocks. And most of them are 500-800m high. Nuts. This is one of those weekends where my mind is in a “what the hell” mode and that’s how most memorable adventures start.

At Gupabal Metro station, there is a large crowd of hikers (remember what I said about what Koreans do on weekends?) waiting at the bus stop. Follow them and you won’t go wrong. The bus goes fast here, they are probably the proverbial race car drivers in their previous career. But quickly we get off at a nice village. Having a friend that knows Korean helps, but not mine as we’re all first timers here at Bukhansan. So I took out my GPS and said that peak looks interesting and lets go the path of least resistance which is straight as the eye can see.

Make no mistake. This is the EASY part of the climb. I don’t have pictures of the tough part because obviously I’m hanging on for dear life. 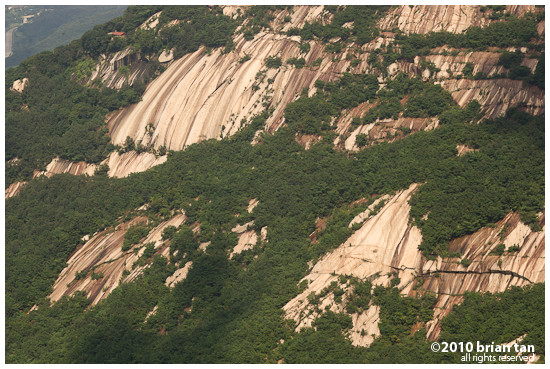 View across the valley. While I doubt climbers for that mountain will have to scale those rock face, they still look scary. 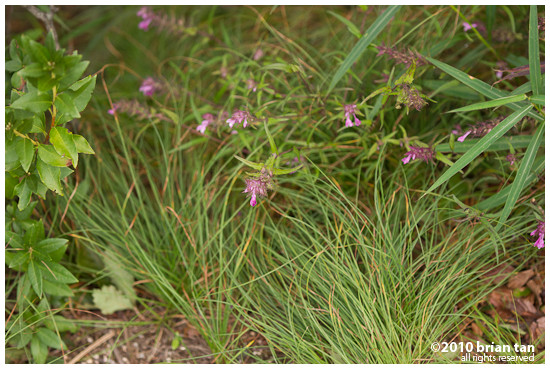 I call this picture: Humble Undergrowth.

The start of the hike was easy enough, a walk through the woods with slight incline. Along the way there are some old hikers that over took us, but we took our time to enjoy the fresh morning air. For some reasons most of the hikers here are close to retirement. The most aggressive ones are old korean women, as they’re tougher than they look. They could be 70 years old and still kick your butt in the Metro when you sit on the senior citizen section by mistake.

Before long (that would be an hour or so), the path starts to be a little tougher, with 30 degree incline and the need to climb on small boulders. Still manageable, but today I had my sandals on, so wasn’t a good idea. I was wishing I had my hiking shoes on, but the hot summer weather made me wanting to go commando this trip. And soon we’re at the toughest part of the climb. Roughly an hour of crazy large rock sections where you either have to do some elementary rock climbing by squeezing your feet between cracks for 10m and grip either ropes with knots if you’re lucky, or bare knuckles into rocks. Although this sounds scary, and it is since you will plunge all the way down the cliff if you decided to take a break, you’d continue going up because old Korean women are passing you like its like a walk in the park. Some sections are so scary you’re stuck between going down the hard way and going up the impossible way. Being stuck at this altitude while the masses are passing by you is not a good ego boost either. So with heart pounding and sweaty palms, no choice but to go up. There are quite a number of sections close to the peak where it is fundamentally just vertical rock, a piece of rope and you. Sweaty hands don’t help either. Hands down one of the hardest mountain I’ve climbed so far. The mantle piece still goes to Huashan in Shaanxi Province China, and Siguniang Shan in Sichuan Province.

No we’re not at the top yet. This is looking AWAY from Seoul. 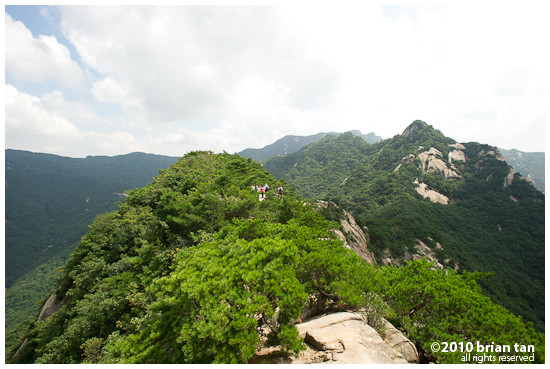 And this is the top. I’m standing on a piece of rock looking towards the path I will have to take to get down, and at this stage I’m hoping that the downhill path will be a lot more gentle than the ascend.

After an hour of so of your life flashing past you, it is time to enjoy the peak. Its bare rock with a path on the ridge connecting the peaks. The walk on the peak is easy enough but with the crowd there, it is easy to lose balance. Then again at that height of 500+m it is easy to have vertigo, but the view is nice and the surrounding mountains look inviting enough for future climbs. The funny thing is that I’m writing this at the comforts of my neighborhood Starbucks and I still have no idea which peak we climbed. I’m not at the Bukhansan definitely, this one is too low. For a while I thought it was Baegundae but now I doubt it. I could be at Yongchulbong Mountain too but seriously I have no idea. However there is a GPS plot of the whole journey but no information on the internet of the name of the peak we climbed up to. What is sure is that we went up the tough way because we came down another route and it was a lot easier. We would pass through a temple (Guknyeong-sa 국녱사) mid mountain.

At the peak, on the way down the mountain.

View on the way down.

Again, looking across the valley floor somewhere close to the peak.

The rest of the way down is quite pleasant. Rocks, but gentle enough not to require walking stick or hands on the ground for the entire descent. The temple is quite a good place to rest and to load up on the water from the spring at the entrance of the temple. There’s a big outdoor buddhist statue of the type that I see quite often in Korea. After a short rest stop there, its time to go down the mountain. At the bottom of the mountain we end up at a valley where there are Korean BBQ restaurants and a dried up stream made up of large boulders. The rest of the path back to civilization winds down along the valley floor along a road. Well, we ARE walking on the road, and there is the occasional car passing by.

This is a welcome sight. Close to the valley floor, the first sign of civilization on the descent. 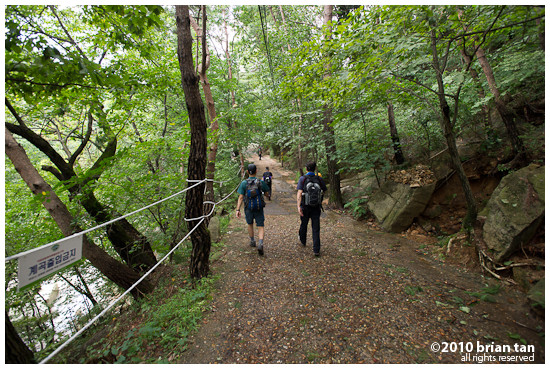 Easy down: Road/path with the stream flowing on the left.

The most important thing out of this trip is that we made it back in one piece. I did have a small issue when I was stuck on one of the rock climb and having to swing my bag to one side to balance myself to get the important 3 point hold on the rock and my GPS slammed into the rockface giving it a little more “character” than I would like it to have. Anyway, at least when I look at the scars on the device in the future I know it came from Bukhansan!

Enlarged Google Earth capture showing the trek path relative to Seoul which is to the South of the mountain complex. 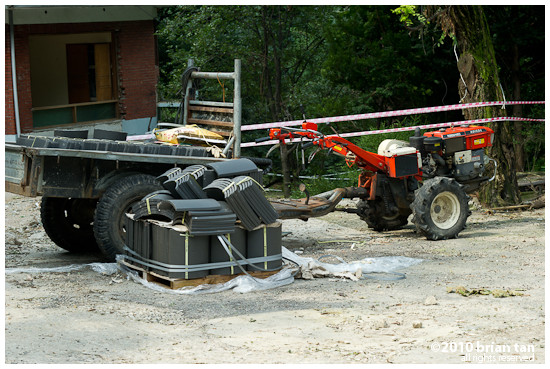 Just like in China, you know you’re in a rural area when you see one of these.

Chillies left out to dry in the hot sun. These will probably be grounded into dust and used for making kimchi.