Maybe this title is misleading. I always thought of the whole complex is called simply: Pyramid of the Sun. It sure is the main draw, in the sense that it is the largest thing in the whole park, but maybe Teotihuacan is more correct term of this place.

What you get there is an old pre-Columbus city filled with pyramids built around a main walkway called the Avenue of the Dead. Dead only by name. It is a nice 1 hour bus ride to the northwest of Mexico City, and takes about half a day for a nice and easy trip. Budget 2-3 hours for the transport (return trip), and another 2-3 hours for for Teotihuacan itself.

Before we start, please remember that the altitude at Teotihuacan is 2300m above sea level (measured on my GPS), so unless you’re from Quito, Ecuador, it is most likely you will tire a lot more easily than back home. So bring water, walk, rest, climb a bit and rest even more.

During the trip, I packed a Tom Bihn Aeronaut 45 Packing Cube backpack which is light and has this nice bottom compartment that fits a 1.5L bottle of water easily. Tom Bihn makes great stuff. Other than that, I had my camera, sketchpad, portable battery and a down jacket in the bag.

Getting There: Metro to Autobuses Del Norte, go to the counter on the far left and the second last booth where you see a sign that says Pyramids. In November 2017, I paid 50MX one way. They do sell return ticket – obviously for 100MX. There are a lot of websites that explains step by step how to get to the ticket booth, check them out. The bus does still stop at least once or twice (I might have dozed off other stops), and I did note that there were passengers getting at a stop around Metro Potrero and Metro Indios Verdes as well. I’m half sure the stop at Metro Potrero is at [19.476964, -99.131442] where you could buy your bus ticket, get frisked and have your face recorded on handycam before boarding the bus. And on the way back to Mexico City I got off at Metro Indios Verdes, which is more convenient if Metro line 3 is what you need.

Once you get out of Mexico City, and pass Cerro Gordo, the bus enters the countryside, where you see much more farms and cactuses. Have your offline Google Maps ready, the bus exits the highway and then once it hits the first roundabout, it makes the first stop at Teotihuacan. I got off at the first stop (P1 in the map). I am pretty sure it stops at P2 and P3 as well. If I had to go back again, I would stop at: 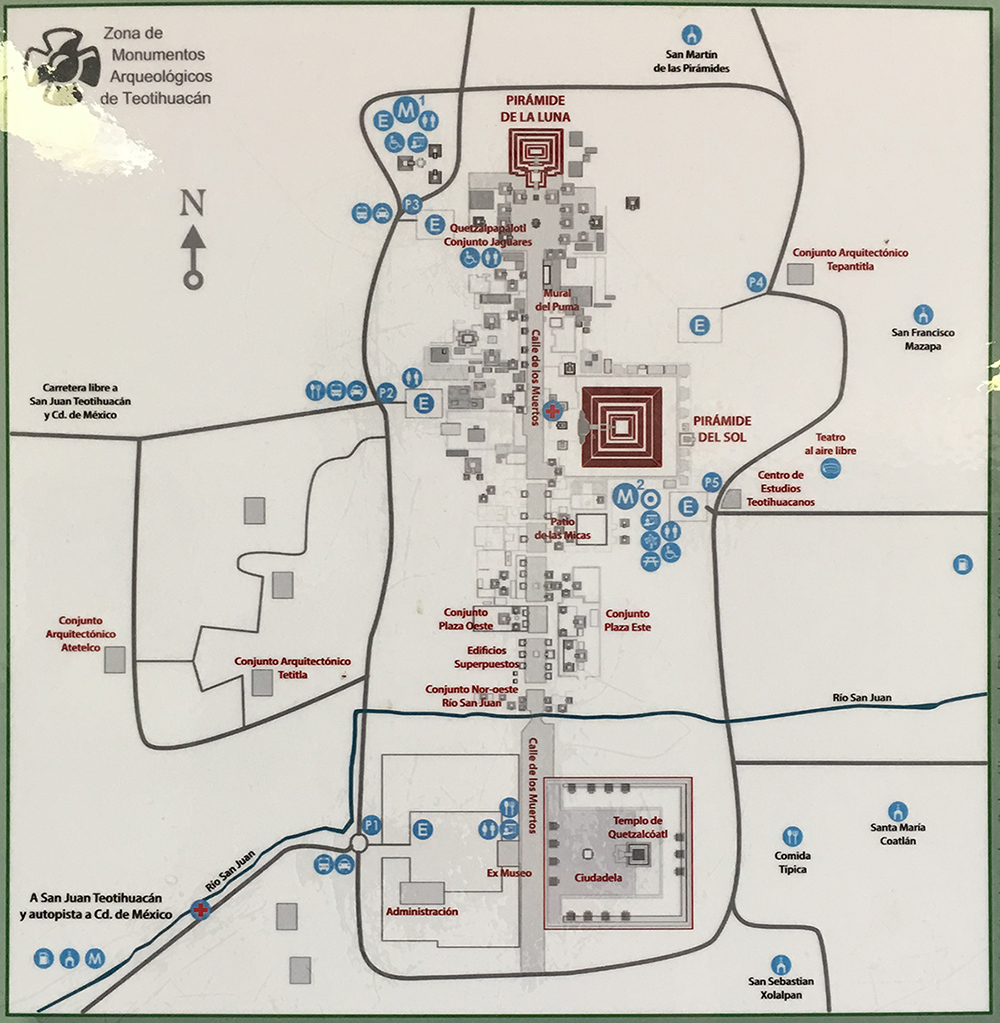 Orientation & Plan: For my trip, I got off P1 (bottom left), the logical thing to do would be to start at Quetzalcóatl and then make it up to Pyramid of the Sun and ending at Pyramid of the Moon before going out at P3 and taking the bus back to Mexico City. Only thing to note is that there are not a lot of places on site to hide from the sun, so bring a nice sombrero with you – but if needed, there are trees and corners of small pyramids that has shadows to hide behind, assuming that there are room. There will be plenty of walking, that Calle de los Muertos (Ave of the Dead) measures almost 2km from end to end, and there will be steps as you go from square to square. I don’t recall how many squares I had to get over, but it felt like almost 10 of them.

Quezatcóatl Temple: I like this one the best. The pyramid is steep, but just 38 big steps to the top – I counted it. This temple is in a square surrounded by steps and smaller platforms, I find this architecturally more interesting than the other complexes in the city. 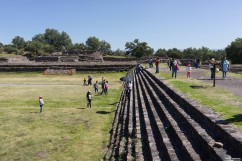 One the many squares along the Avenue

Avenue with Pyramid of the Moon in background

Avenue of the Dead: Take a very long walk up and down stairs past countless squares before you get to the large Pyramid of the Sun. The squares are interesting, but after a while they all feel the same. I can imagine back in the days when the inhabitants walk around or perhaps markets litter the place. Try to clip the smaller steps to get good vantage points for photographs. As you walk along the avenue, the Pyramid of the Sun gets larger and larger – there are ample time for nice photos. 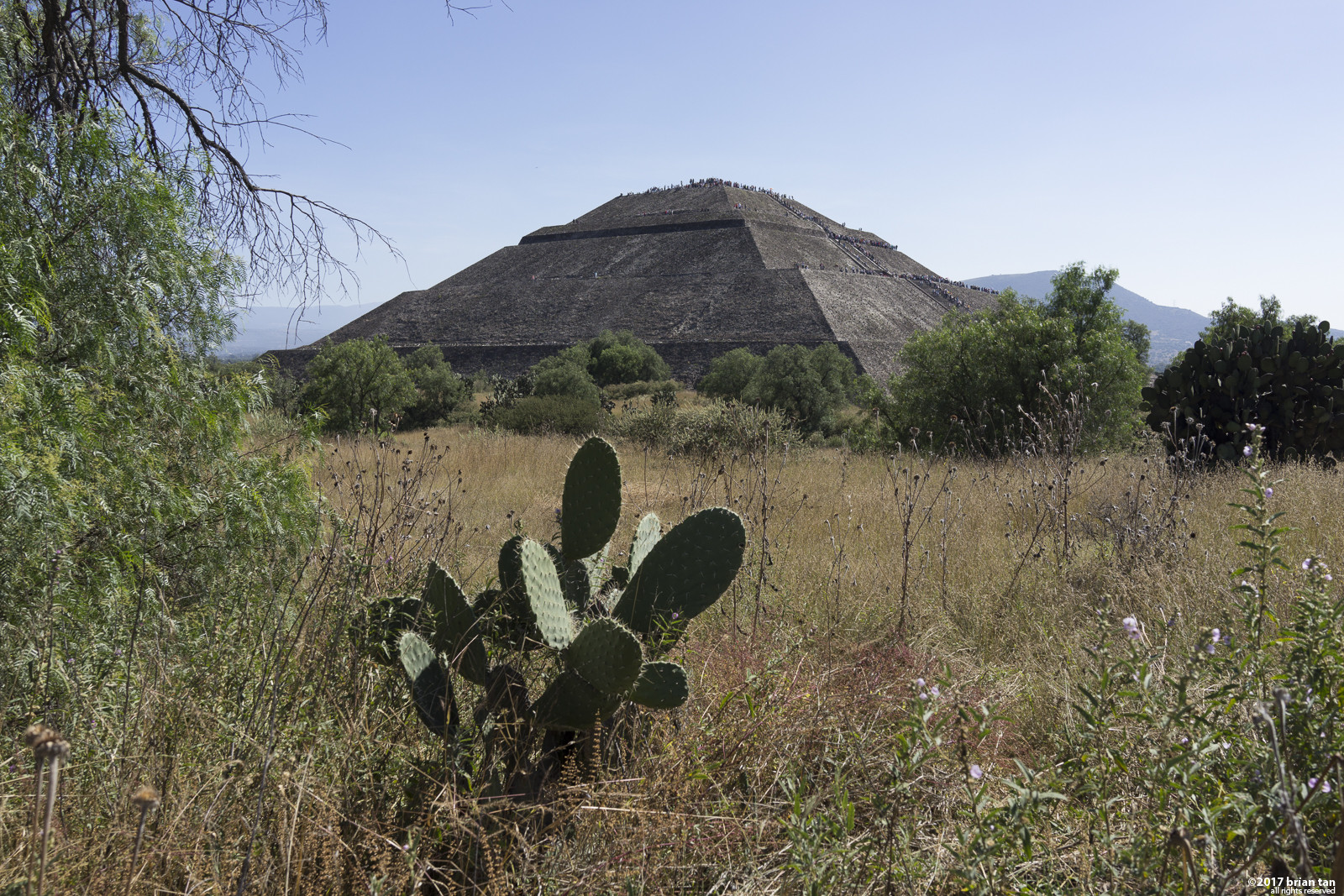 Pyramid of the Sun: I did not get to climb it because of long queues and I think the sunlight was too harsh for photo anyway. Besides, I think that photos OF the pyramid is more interesting the photos FROM the pyramid. queues are hundreds deep, and they do limit the number of people that climb it so that you do not have human jams.

Pyramid of the Moon: Went straight to this pyramid at the end of the avenue as it is less crowded but didn’t climb this one either. I would argue that the two smaller flanking pyramids in front of the Pyramid of the Moon has better vantage point and almost nobody climbs it to save strength for the bigger pyramid.

Spent a good 3 hours here. Made my exit at P3 entrance at the Pyramid de la Luna. Bus stops just across the road from the exit. Just relax, sit down and wait for the bus at the exit. Eventually it does arrive, and my return tickets did work. Bus did a stop at Teotihuacan Centro and a Municipal police would board the bus and do a security check while another person will walk around with another handycam taking movies of everyone in the bus. A guy in sunglasses and bulletproof vest would check every bags and frisk anyone that looks dodgy. Not me though. Only after they complete their 15mins check will the new passengers get on the bus. They are also all camcordered before entry. Interesting experience.