Architectural detail: An old door with armored metal sheets taken at one of the secret entrances into the city along the wall.

Alright, I’m here now in a new country, ready to explore the place out and what a better place to do this than during the golden weekend. We are now around end of September, and this is what the Korean calls their Thanksgiving and what happens is that the whole of Korea goes on holiday for a whole week. Equivalent to the lazy christmas week for the Americans and a shorter version of the French summer holidays. Offices will be closed. Everyone will either go home to visit their elders or gravitate towards the summer playground of Jeju Island. Whatever it is, I’m not about to go far on this long week, in fear of highway traffic jam, lack of return tickets on trains and flights, and overpriced hotels. Hell, I’ve not even had time to visit any place around Seoul yet. So its time to do a little research on Wikipedia and Google Maps for the best place to visit for this long weekend. 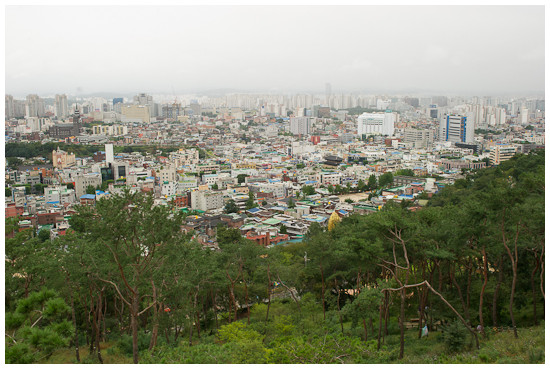 Suwon City, nothing special about it. This is the view from the top of the hill where the wall passes through.

Old city walls separate the ordinary residents from the Kings that live inside the wall. Not true of course, just cooking things up. 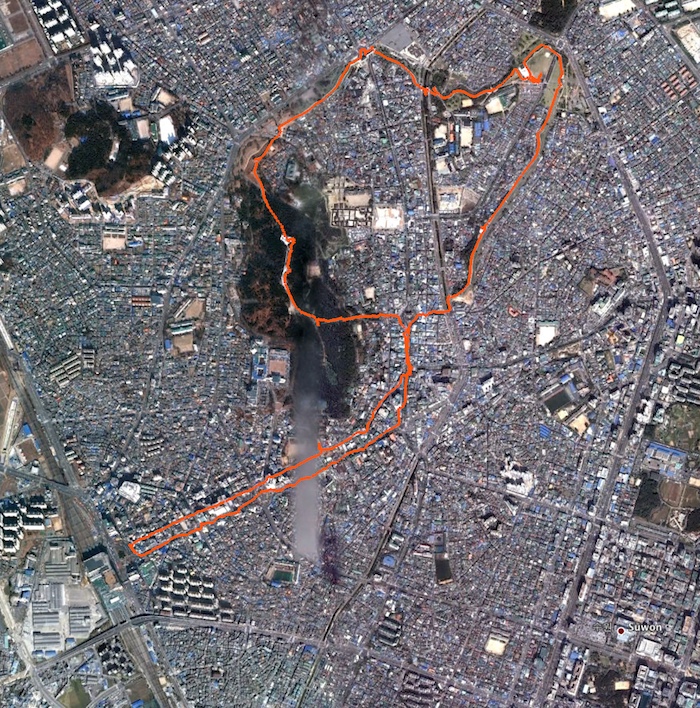 Map view of the walk. Train station is on the bottom left. Wall is that baloon formed by the orange line.

The old town of Suwon looks interesting. What it is, in short, a town with a core that has its ancient city walls intact. From the map it looks a lot smaller than the city walls of, say Nanjing or Xian in China, but perhaps they don’t have as crazy an enemy to protect against; who knows. Best of all, Suwon is just an hour or two out to the South of Seoul allowing travel by Metro in the morning and returning late in the evening. So the plan was hatched. I will need to plot a GPS course this trip while walking the whole circumference of the city wall, which looks achievable in a day.

I has been some break I have been having, so packing up for a day trip is starting to be difficult. My muscle memory doesn’t apply to packing. Small bag, a DSLR and a lens or two, Audio Recorder, GPS and phones is all I need for this. I’ve started to move towards using the iPhone and Android phones for navigation. Although good for live Google Maps, it still doesn’t replace a stand alone GPS for the ability to hang it out of the bag for 10 hours straight collecting GPX information every 3 seconds.

All ready, I leave late around 1 in the afternoon, thanks to my inability to wake up early for trips. It should still be summer this late in September but the cloudy day is causing temperatures to drop to around 20c. Weather forecasts is not too good, with chance of rain, but in the 30-40% range so I take play the probability game and didn’t pack a rain jacket.

Getting there is easy, just find my way to Metro line 1 heading south. Will be taking a train to Sindorim station on line 2 and then change to line 1. Line 1 also branches off towards Incheon city, so be careful not to get on to the wrong train. There are announcements in English so it should be easy. Line 1 trains are also a trekking advertising board, with all the recommendations of mountains and sights at the stations that it stops on the main map above the train doors. I take note. Stations are spaced quite far apart once out of Seoul, so the trip took a litte longer than I planned.

Arriving in Suwon train station, the first thing that grabs your attention is a large AK shopping mall with everything, even a Baskin Robbins, so this is a good place to stock up on water and other necessities for the walk ahead. I make an unconscious plan to return around dinner time so that I can have a meal before returning to Seoul. At least today there seems to be quite a number of foreign workers hanging around the train station. More than what I have seen in Seoul, outside of Itaewon of course. I see Africans, Filipinos and some Indonesians. No idea what they’re doing here, either there’s a big place that hires foreign workers or they’re here for the same reason as me.

The start of the wall on the left of Paldalmun

This part of the wall is quite obviously reconstructed

My walk along the old wall of Suwon starts at Paldalmun, which is the one of the main gate. The road leads up to it and then goes around it treating whatever is left of the gate as the centre of a roundabout. And this is dead in the city center. There is a tourist information center here but closed today thanks to Chuseok holidays. Looking at the map, the left of the gate is the part of the wall that goes up a hill and on the right side is a river. I thought it would be better to climb the hill first and then downhill all the way rather than ending the trip with a hill climb, so I will start on the left.

The start of the wall passes through a small forest. These stacks of rocks is something locals do while making a wish. No they’re not supernatural, although I thought it was so when I first saw it.

What’s sure here is that the wall is definitely reconstructed. There’s something not very pleasing to me about reconstructed wall. I prefer it in the original state. It even has flags and long staffs with fake plastic blades to represent a battle ready Suwon from ancient times. Having a new wall where the old wall is not the same thing. I shall go on a long monologue about reconstructing historical architectures in a different blog.

Big irregular boulders stacked up to form the wall. I believe that this part looks like an original part of the wall.

The first part of the walk was tough but not terribly so. Only reason it is so is because the darn hill. Its not a terribly high hill, but a hill nonetheless. Once I get to the top it is mostly level. The wall is punctuated with turrets and command centers. The ambience is enough countryside to be able to take a relaxing walk punctuated with the occasional car horn and traffic noise but perhaps faint enough not to be able to notice it. For me its loud enough I don’t do too much ambient audio recording there. There are signs on the wall describing each architectural feature of the “advanced” wall design, like regular areas where there’s a section sticking out of the wall so that archers can shoot sideways at infidel invaders – for lack of a better word – and arrow port holes on the wall that slopes 45 degree downwards. I find some of them so perplexing how one could shoot an arrow through a 2m long square hole without touching the sides and attenuating the force and range of the arrow, but got to trust the ancients. 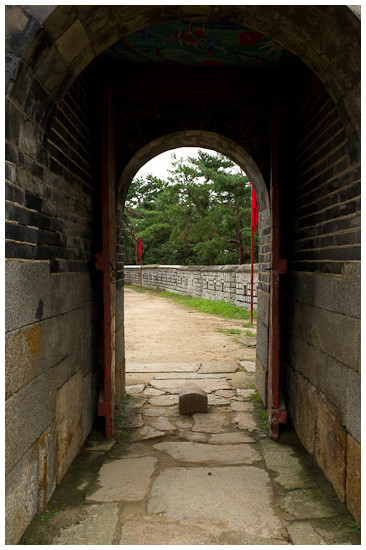 This is one of the secret entrances into the city along the wall.

New part of the wall, this is at the top of the hill

Turrets like this punctuates the wall. Provides a place for the soldiers to hang about and a good place to shoot arrows at invaders while being chickens.

Command centre: There is a stair that leads to the second floor where the King can look over the whole battlefield. 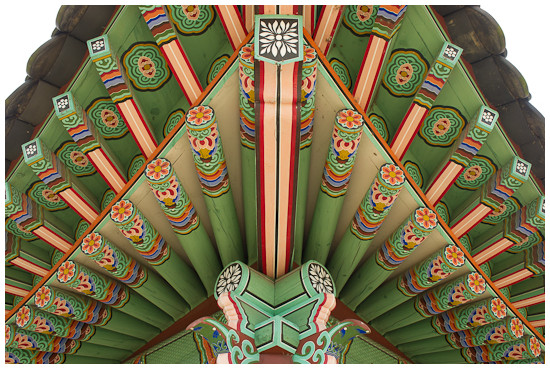 Architectural detail of the Command Centre

And the thingy to hit the bell with!

There are also a bunch of secret gates apparently built at hidden locations to allow transport of provisions during battles and at the top of the hill there is crossbow turret at Seonodae just next to an impressive command tower on the top of the hill. There is a ticket office there but today there is no one here so I get to save 1000 Won. The rest of the walk around the wall is easy, but long. No problem for families with prams to walk entire circumference with some heavy lifting up and down stairs.

If you notice in the map posted earlier, there is a river that runs through the old town. At both ends of the river, where the wall runs over the river there are huge gates (only one on the North still survives today) where gates prevent boats from entering when closed. However I have no idea how they could prevent the siege party from poisoning the river water and forcing Suwon to give up the battle. Then again when I look through the history books, looks like this place was never used as a place of residence for the King since he never survived to see it completed, hence the capital stayed in Seoul. 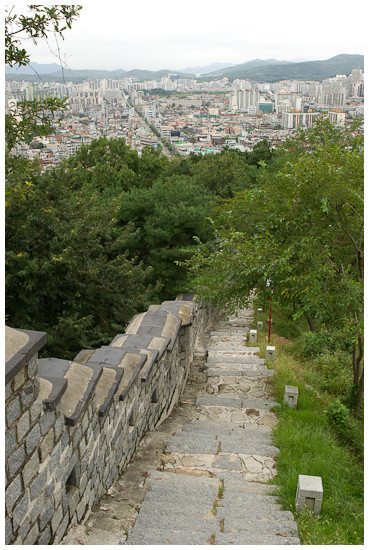 After the Command Centre, it is downhill all the way

Where this was taken I was still on the wall, but at one of those areas for archers to be able to shoot at invaders sideways, like a little balcony.

This is one of the gate at ground level, notice the extra level of protection given by the curved semi-wing that sticks out from one side?

Nothing much to talk about most of the walk. Its just a wall. That’s the thing I’m going to go on about. I’ve been walking along ancient walls that has not been renovated, displaying the injuries sustained in wars and scars. Each one seems to have a story to tell. You walk around and wonder how each mark was inflicted. There is a sense of intrigue and imagined plot. When a wall is renovated, it looks as fresh as the corner Macdonalds restaurant. Sure, you can tell me that some famous event happened there, but I’m distracted by the new thing sitting there. 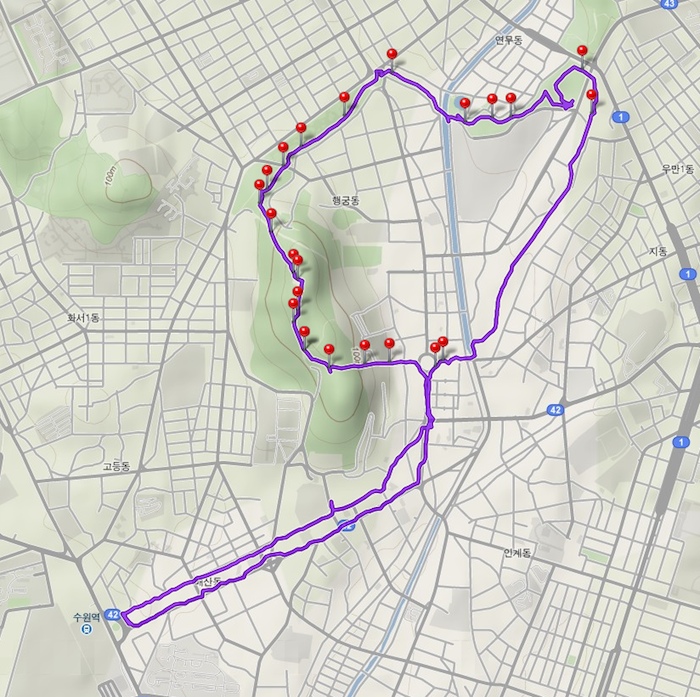