Processed a roll of Neopan SS in HC110B last night. There was lack of information at EI100 for this film in HC110B all over the internet, including the Massive Development Chart, which carries only 120 film at EI100. Even on the Neopan SS specification sheet they only have development times for EI200 (6 1/4 mins at 20C). Anyway, I souped it at 5 3/4 mins for EI100 for 135 film, and it looks like came out ok. The density looks perfect, and I will do some scanning tonight to verify it.

How can I not try it. Been hearing plenty about this dirt cheap chinese black and white film with the limited dynamic range and possible unpredictable performance that I’ve got to get some to muck around. It costs 7.5 rmb at Huan Loong dept store next to the train station and I’m pretty confident its the same elsewhere.
Was looking for Lucky 400 as well but it seems they do not make nor carry it anymore. Will keep looking for it.

So 4 rolls to fool around, portion 2 rolls for Rodinal and the other 2 for HC110B, which i still have some stock solution leftover.

I’m currently thinking of switching my default Konica-Minolta scanner software to one of those third party system, primarily because I find that the default program seems to want to do strange things on the autoexposure function. My black and white photo scans are usually lacking in dynamic range. While testing out Vuescan this week I realised that I was able to adjust the scan so that I get maximum details out of it and then adjusting the exposure in something like Lightroom in order to have a balance between detail and exposure.
So excuse the slightly darker looking photos in black and white.

At the same time I’m thinking of getting some IT8 targets to calibrate my digital camera and photo scanner. I think some of the colour photos just don’t look right in terms of colour, even on a calibrated monitor. So that’s the next project coming up… I have already found a reasonable priced vendor for the targets. URL below.

What a scientific title this time! For the lay person, I had a bottle of Kodak HC110 photo developer sitting in my storage box for the last 1 year, bought it while I was in Paris in 2006, and this time I thought I’ll try it out on 2 rolls of Tri-X (400TX) film that was taken in the last 1 month.  HC110 is one viscous fluid… reminds me of concentrated cough syrup that looks like beer in colour. Doesn’t smell that bad, actually I didn’t notice any smell at all. You first do a 1:3 ratio from the concentrate syrup into what they call the stock solution. I store 1 litre of it in a mineral water bottle. Then from there, you mix to generate the  working solution. For this case I use solution B (1:7 ratio with water) and used it on the 2 rolls.
END_OF_DOCUMENT_TOKEN_TO_BE_REPLACED

My first roll with the M6 and Summicron ASPH 35mm came out of the developing tank this week, and after scanning, here are 3 from the roll of 36. The first shot was totally out of focused. Like I said, the viewfinder is always in focus on a Rangefinder camera, so since I’m used to SLRs, I just took the shot thinking it was ok.

This first shot above of the alleyway near my apartment actually looks much better after scanning on the 5mb JPEG file. I had to compress it quite a bit before uploading, so the so called ‘Leica Look’ is more or less lost. In the actual scan, you could see that the third bicycle was sharp while the rest were slightly blurred. You can’t see it in the picture above, but its there in the large version. 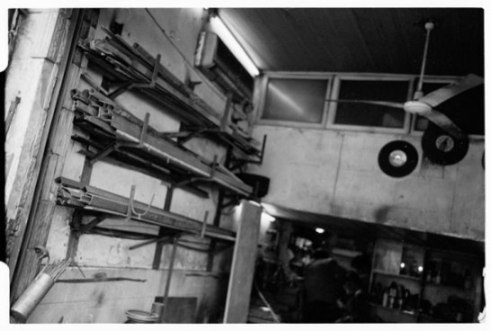 And this next one was my first take on ‘shooting off the hip’. The edge of the pipes are clearly in focus while the rest slowly fades into blur. Somehow I like this shot, although clearly the original intention was to shoot was was inside the shop! Focus was way off, but exposure was ok. I got to go practice my focusing.

This is another bicycle shot. Original shot much clearer and the bicycle really stands out. Can’t tell from this slimed down version.

Overall, I’m quite happy with this roll. Got to practice, practice, practice. I dont think I can get to people close enough without them noticing. When you lift your camera to the eye, they will notice. But its true that with a rangefinder, when you snap, usually its so quiet no one will notice that their picture has been taken.

Came back from Tokyo with me first serious camera. Serious here means a minimalist rangefinder, slightly more than minimalist since strictly speaking it has a built in metering. I’m talking about the Leica M6 here, and I guess with the only RF lens I will ever probably need… A Summicron 35mm ASPH.
First thing first. And the first roll in today is an Ilford FP4+ since the sunlight is out in full today in Shanghai.

After a couple of shots, its not that easy to remember that what you see through the viewfinder is not what the film will capture. You have to remember to take off the lens cap before taking the photo. Focusing with triangulation is not something that is second nature. Although possible, I’m still not capturing the moment, still taking as though I am using an SLR. It’s a problem since my style has always been candid street, and with SLRs i need to lift the camera, focus quickly with my eye (no autofocus) and snap. With a rangefinder, when you look through the finder, everything looks sharp so my brain would be trying to compute this apparent phenomenon. I guess it will take practice to get used to it.

Been busy going through about 1000 photos, at least 80% of them from the Ricoh GR Digital, which I brought to Taipei, Hong Kong and Beijing and the rest from my Nikon D2H used only in Beijing. Sorting is quite simple, I go through them and if they dont hit me the first time I see it or if the shot looks too touristy (flat and no emotion) it goes away. After that process, kept about 600 photos, and out of that, I’d say half is relatively flat but I’ll keep for nostalgic reasons.
Then its time to tag the photos so that it can be searchable in Adobe Lightroom. But since I put each shoot in a separate folder which I label according to date I upload and location, actually it doesn’t really require tagging, but why not? So the sorting took me 2-3 days to go thru. And I’m glad to say that now I can start uploading the photos up to the site. Hong Kong comes first. Taipei later since there are more pictures. I didn’t write any article for Beijing, but I guess I’ll just put photos plus a little commentary later on.

There’s this thing about taking photo of activity around zebra crossings. Day or night, messy or simple, it almost always looks good in black and white. I’ve done a keyword search on my b&w collection just for Shanghai alone and came up with more than 30 of them. Here’s a collage of 6 that got clicked in random by the mighty mouse. 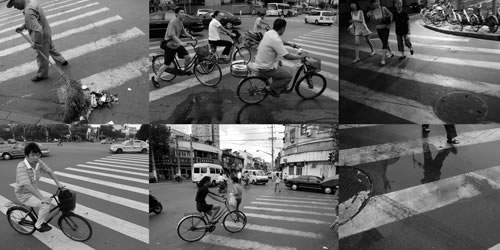 Came across this site (www.honlphoto.com) which sells highly rated photo wraps and flash accessories. Prices seems reasonable, and they ship worldwide using USPS (instead of sometimes very expensive UPS/DHL combo). I’ve just ordered a medium sized wrap for my camera or lens when I need to dump them into smaller backpacks, and a regular sized speed snoot for directing the light into a smaller beam for easier targeting on one of my Nikon SB800s. Ran up a US$60 bill, which is quite reasonable including shipping.
Should arrive in, say, a week or two, and we’ll see if its really as good as people say it is. Treat it as a birthday gift to myself! Although I would have loved another Voigtlander anytime.

Just for the fun of it, I did a test of my 3 prime lenses, shooting someold buildings out my apartment window on a clear day in Shanghai. The 3
suspects are:

Nothing too scientific. A D2H mounts those lenses, and bolted down to a
Kirk BH3 ballhead and a Manfrotto aluminium tripod and triggered via
cabled release. All major aperture stops are tested. Half stops on the
Voigtlander are avoided as far as possible since they are not registered
on the EXIF. File format is RAW of course.

Nikkor 35mm f1.4:
f1.4 has the hazy look to it. Worse off when the subject is in the
distance, and a little less so nearer. But image is soft, and probably
only useful when you REALLY need to use f1.4. Definitely not something I
want to use when I can avoid.
f2.0, the hazy look starts the clear up, and photo starts to get
sharper, both for corner and center of image. Sharpness improves as you
move to f2.8.
f4.0, peak sharpness for center seems to start from here and remains up
to f11.
f5.6, peak sharpness for corner for my sample seems to be at f5.6 onwards.
f16, sharpness starts to deteriorate compared to f11, both at center and
corner.

Voigtlander 40mm f2 Ultron:
Nothing much to report here, all apertures seems to return same
sharpness, but f2.8 seems to be a little sharper than f2.0 but that’s
very very minor. Could even be of vibration from wind. Sharpness from
center to edge is excellent. At f2 and 2.8 it seems to beat the 35mm
f1.4, but at f4 nothing can touch the 35mm Nikkor, which seems to be in
a class of its own. However contrast from this lens seems to be slightly
better than the Nikkor. Could be because of the intermittent cloud
cover, but I’ll trust my eyes on this one.

Nikkor 105mm f2.5 AIS:
f2.5: Sharpness in centre is quite good. Wanted to say the same amount
of detail as the Ultron, but its not comparable due to very differing
magnification. Still, very usable wide open.
f2.8: A little improvement in the level of detail in the photo. Like
going from very good to excellent.
f4.0: Looks like the peak sharpness and level of detail in the photo at
this aperture. Sharpness looks maintained up to f11.
f16: Reduction in sharpness due to refraction can be seen at this
aperture. Reduction continues to f22, which is a little worse off than
f2.5. Somehow the corner and center seems to perform equally for this
lens, unlike the 35mm.