Shanghai is famous for this little dumpling with thin skin and soup inside. Bite it and if still hot off the steamer, it guarantees a scalding where it hurts.

The most famous restaurant in shanghai that sells them by the bucketloads, figuratively speaking, is Nanxiang Restaurant over by that tourist hole, Yuyuan Garden right in the middle of the city. Its not too far from where I stay and on weekends, I sometimes take the walk over, and stand in the half and hour queue (if I’m lucky). Its not the best in Shanghai though and its quite obvious it’s famous because it’s famous, no more. Nanxiang Restaurant also starts to expand with branches overseas. 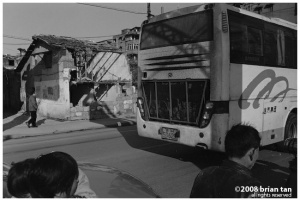 So not to dwell too much in stories, I found out during a chat with a colleague that the xiao loong bao, what this tasty dumpling is called, was first invented in a town called Nanxiang. Just tens of kilometre from downtown Shanghai so close that a public bus (actually many from all points) runs there from the Shanghai railway station, so we found out after browsing the chinese languaged internet. So quickly this became my mission for the coming weekend. 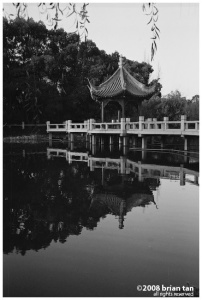 Based on a copied and pasted list of public bus that goes there on my phone, I went out looking for this place that strangely most of my colleagues have never been to. The bus from Jing-an temple metro stop doesn’t seem to exist. I’ve checked the locations of bus stops and list of buses that stops nearby at the metro station and couldn’t match the number. What I’m sure is, if there’s a bus that goes somewhere in Shanghai, its bound to stop near the Train Station.

After a long time searching, the bus I took was bus 517 at exit 6 of the Shanghai Train Station metro line 1. This is misleading because the bus stop is not exactly AT the train station. You have to make it to the north exit square and the follow signs pointing to bus 517 and this is a 20 minutes walk at least. At every junction look out for the signs that points to the direction of the bus stop for 517.

On the bus: This is funny. I use the Shanghai Transport card, aka the Jiaotong, and there is a conductor in the bus sitting next to the rear exit folding doors and has a console in front of him. This where he controls the pricing and has a comm system to talk to the driver. The price for the trip seems to be 4 RMB although I’m not too sure about it. Whatever it is, it’s not too expensive compared to the price of taxis.

Guyi Garden: Now, in the bus you have to be quite careful where to stop. I have a GPS map of Shanghai on my Nokia E71 and managed to get a window seat all the way there. Was able to track my location all the way to a town called Nanxiang. Unfortunately, I have no idea where the central attraction is, but I thought that a lake with green gardens should signify something tourists would want to go to. Not true. The easiest way is to look out for a signboard above the road that says Guyi Garden, and it exists in English as well. Its ok if you missed the stop and realised it after you passed it as the next stop is just across the corner after turning left. 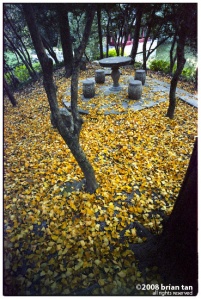 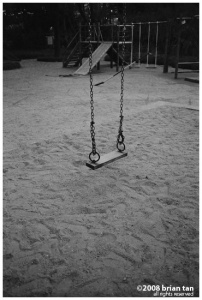 First thing I noticed was that Guyi Garden has a restaurant in front of the main entrance. This restaurant looked oldish, and from the menu, looks like THE place to come for the xiao loong bao. But since it was only 4pm, I decided to have a look at the garden. It is not free, as usual, and 12 RMB gets you in. 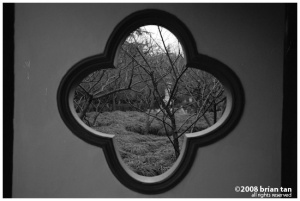 After the entrance to the park, the first thing that caught my eye was a big basket of the famous dumpling. It was starting to get quite cold here and sun is starting to set. I walked quickly around the park. There’s a lake with a zig-zag bridge and a pavillion, quite standard in most Chinese garden. The walk in the park was quite pleasant, but since it was getting dark I didn’t have too much time to remember all the sights. The park is medium in size, probably 1km square , maybe a little bigger since its area we’re talking about. The most interesting architecture in there was a pavillion that’s suppose remind the Shanghainese of the Japanese occupation and what’s special about it is that usually Chinese roofs have edges with accents of dragons, or mythical animals. This one has curled up fists. Looked like an ancient joke, but too bad I don’t have photographic proof as it was in the shodow of trees and I couldn’t get adequate exposure with the 2 film cameras I have loaded with ISO 125 and ISO 160 films respectively.

So by 5pm the sun was starting to set, and it was getting to low single digit Celcius, and it was time to go to the restaurant. Strangely, this park seems to be the confluence point of newly-weds, and the firecrackers attest to this. Even at the restaurant, there are many wedding limousines arriving and hurriedly leaving. 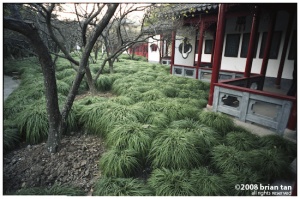 However, my attention was affixed by going for a basket of speciality steamed dumplings from the place that originally invented it (according to my news). Cheap, 15 RMB buys you a basket of 10. Cheaper than the one in Shanghai, but not by much. Since I wanted to go back to Shanghai before 7:30pm and drop the roll of Kodak 160VC I’m shooting today at the developers before they close, I decided to buy it to go. 10 dumplings and plenty of vinegar no it, I walked to the bus station diagonally across the road and past the traffic junction, savouring on a rather good set of dumplings, from the place that started it all. And it was good…